The title of this post is misleading. I think distributed agile teams do work, but only if everyone is remote. I’ve come to the conclusion that what doesn’t work are what I call “semi-distributed” teams. Semi-distributed teams are those where some people are co-located and others are not. I’ve seen all sorts of arrangements over the years. Everyone collocated but one person (experiencing that one currently – me being the odd man out), some collocated in one office and some in another, a few people distributed remotely and others collocated, on and on it goes.

The reason I argue that fully distributed agile teams work is because everyone is in the same boat. Everyone is disconnected and therefore looking for solutions to the problem of connecting with one another. With semi-distributed teams you have some people who are desperate to be a part of the conversation, while others are often quite content with their little collocated circle. I think this fact is often overlooked when people point to Open Source Software (OSS) development working in a distributed fashion and equate that to proof that semi-distributed projects can work just as well. One of the reasons OSS development works is because everyone is (typically) working remotely. The ease of looking across your desk and striking up a conversation with one of your team members is not an option with most OSS projects. Everyone on the OSS project needs to put forth an extra level of effort to strike up a conversation, even if it’s just chatting in IRC, sending an email, or doing a screen share session. 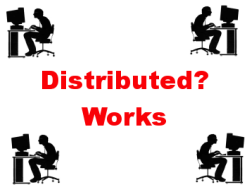 Some may read this post and have a moment of truth smack them right in the face, “Wait a second, I’m on a semi-distributed agile team!” What do you do in that case? My suggestion is that you figure out a way to make the team collocated. There are many creative ways to make this happen. For example, the team that I’m currently on and am the lone remote person on the team (Scrum Master, nonetheless!),is going to get a local replacement. If you can’t go collocated, then a radical idea might be to go completely distributed. Have everyone work from home and force themselves to deal with being remote. It’s amazing how well teams can stay connected these days when they’re all working from a different location. In other cases, it might be possible to create one team that is collocated and another that is truly distributed. Team to team communication is often tricky, collocated or not. At least with a collocated team and a distributed team you’ve eliminated the avoidable problems of a semi-distributed team. The problems you’ll deal with in this case are the same problems anyone scaling agile is faced with. It’s not an impossible mountain to climb.

If you’re still stuck on a semi-distributed team after trying some of the suggestions mentioned above then I wish you luck. The best advice I can give is to enforce use of constant connectivity through technology like video conferencing. People will likely object to this due to a sense of loss of privacy (understandably so), but it gives you a fighting chance of keeping everyone in the loop. Cool apps like MeBeam provide the ability to have more than two participants on a video conference. You’ll also want to investigate technologies that allow you to share whiteboards. I don’t have personal experience with these but I’ve seen them in a variety of places, especially schools. I can see electronic whiteboards helping where collocated members step up to a whiteboard on a whim and start jotting down some new design, architecture, notes, etc. These whiteboard sessions often turn into important moments of team collaboration. It’s moments like these that get lost by the part of the semi-distributed team that is not collocated. Use every communication and collaboration tool in the toolbox if you’re stuck on a semi-distributed team, you’re going to need them.