I had the honor of working with Chad The Developer for nearly two years. Yes, Chad THE Developer. His legend will live on as his last day working at the Joplin office is today. Memorable moments of Chad include:

Chad does not copy and paste code. He will re-type code in because he has been bitten by copy and paste so many times. I’ll never forget the day I was sitting next to Chad and watching him meticulously type, character for character, a method into his class that was displaying on his second monitor. I said, “Dude, what are you doing?!” Everyone around us started laughing. They knew exactly what Chad was doing.

Wireless power. Chad was evangelizing an incredible new invention he just heard about to everyone at the office. No one believed him. I’ve been told (since I didn’t work there at the time this happened) that Chad said you would be able to get wireless extension cords at Radio Shack in the not so distant future. I don’t know about wireless extension cords, but it appears Chad has the last laugh as wireless power is definitely real, no matter how funny it sounds.

“My integration tests won’t run.” This is a legend to me. I wasn’t there to experience this one, but there are a number of people who witnessed this one a few times. Why wouldn’t Chad’s integration tests run? Good question. Apparently, it helps to have WebLogic started when your integration tests depend on WebLogic in order to run. 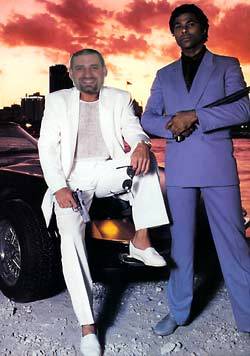 It takes a very confident man to wear white Don Johnson, Miami Vice style pants to the office. Chad did this not that long ago after returning from his vacation in Mexico. Apparently, he hadn’t left the spirit of the beach behind. I remember seeing Chad walk past my desk in his ever so stylish white pants. Out of shock and instinct I called out, “Hey, Panama Jack.” The best part is that Chad turned around immediately. It was as if my words brought him back to reality. He was no longer strolling the beach with a Corona. He was back at work. He proudly told me that he wore those pants all the time while vacationing in Mexico. I don’t believe he’s worn them to work ever since.

Hot Pockets. When I first started working at the Joplin office I could’ve swore Chad was on a Hot Pocket diet. I thought maybe he was some sort of Hot Pocket version of Jared, the Subway guy. I haven’t seen Chad tear into a Hot Pocket in quite some time. I think it has something to do with my virally spreading the video clip of Jim Gaffigan’s stand up routine on Hot Pockets. I had everyone watching that video clip, where Gaffigan makes fun of Hot Pockets and makes us all laugh in the process. One day, after seeing that video for probably the 20th time, Chad turned around to all of us in the room and vigorously defended his beloved Hot Pockets. Chad couldn’t understand what Jim Gaffigan could possibly have against such a tasty treat.

Chad is a good guy. He’s a good developer too. I wouldn’t give him such a hard time in this post if I didn’t think very highly of him. I wish him the best of luck at his next job.